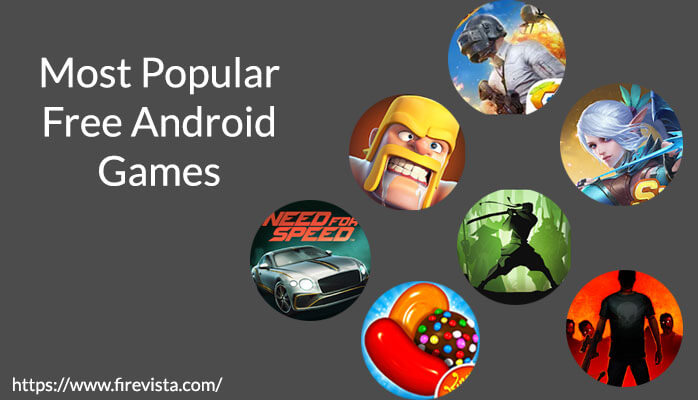 Google Play Store offers a vast range of mobile games that can be played on your phone. But, not all the games are the real gems. Here, we’ve tried to sort out the top 10 of the best and most popular free android games of all time. These can be easily downloaded from the Google Play Store.

The list of best games of 2019 includes most of the categories which we use to play. This list will say out those games, which have the best customer reviews and are the top in their specific category. So, without wasting time, let’s get started.

An arena-based multiplayer game, full of teamwork and strategy. Moonton has designed this game in a way that the players can experience its PC version on their palms using their phones. If you are into action games then this is going to be your next obsession.

Multiple maps and templates make this game a perfect choice for the people who love to play strategic games. It offers intense battles, simple controls, 10-minutes matches, and a quick team build-up technique so no more time to wait for enjoying the play. The new AI system handles the game in case of a bad network connection or player drop.

Hits till now for this game are more than 100 million and the rating is 4.3 which shows the gaming arousal of this game amongst the players. The Mobile Legend Bang Bang can now also be live-streamed and users can make the gameplay available on gaming websites and youtube.

Shadow Fight 2 is a pleasant surprise for all the gamers out there who are into fighting and action games. The game roams around the concept of RPG and classical Fighting. Users are allowed to form themselves in an avatar with some great lethal weapons and protective armor.

Animation of the game acquaints the player with some lifelike details. The great fighting interface of the game can be used to devastate the enemies with self-intuitive controls. If we talk about all the journey that the players experience then it goes through six different worlds full of demons. These demons can be assassinated using some epic swords, nunchucks and the player can save himself using protective armor.

The storyline of the game makes it stand out amongst its competitors. Hits of the game which are more than 140 million show the popularity of the game. Players have also rated the game for more than 4.6 which is based on their experience.

Talking about the best android games so how can we forget the zombie apocalypse. For all the zombie apocalypse lovers, Into The Dead showcases the run for life. Assault and action is the ground of the game where you kill and save your civilization from the hostile of zombies because dead are rising!

Help you stay alive using some of the homicidal weapons available to kill. Compete with your homies and challenge them to beat your records. The game is full of missions and the more you play the more you get into this. Challenges can be easily faced in the game because the dead are rising and you need to kill them again.

The popularity of the game can be easily seen by the rating and hits Into The Dead has got. It is downloaded for more than 50+ million times and players have shown their experience and a love for the game by rating it 4.4 stars. So, a must-go for game.

The game is taken to a whole new level and it lets you form a team and train your players. Later you can gain a superstar status among your rivals. To improvise the play tactics and skills, the game lets you play in amateur and pro division among the rivals.

A game with 100M+ downloads on Play Store and best-reviewed game by tech geeks. You can go for this most popular android game if you are into soccer and you can’t make it to the field or the PlayStation.

In the list of most popular free android games, Minecraft is an arcade multiplayer game to be played by up to 10+ players and developed by Mojang. The game is for craft lovers, which is full of craft-work. Players can take the game for a spin and can build simple homes to big castles & armors to defend the mobs.

The game offers a unique map, different skins and texture packs from different creators, and lets you compete and socialize in unique lobbies and many more things. 4 users can connect using XBOX live account and can play together.

The game is available for 30 days as a free trial and later it can be activated for a pitiful amount of money, but believe me, this amount is worth all the experience you will have while playing this game. This is one of the latest android games available on the Play Store.

If you are a 90’s kid and you’ve played enough arcade console-based games then you must be a lover of the Mortal Kombat. Now, Mortal Kombat can be played on your android device. The Warner Bros International Enterprise has made it possible by bringing all the Mortal Kombat 11 console characters in the MK mobile version.

The gameplay is now more realistic due to the enhanced graphics and visuals. The game offers all the old characters, Kombat 3v3 battles, and multiplayer cabal wars. Players can also customize the characters to be unique among their peers. You can earn special rewards to make the game more fun.

Nothing can beat the console Kombat, so the Warner Bros tried to make the console experience available in the palm of the users. The game has got more than 50 million installs and ratings of 4.4 stars. The features of the Mortal Kombat make it listed in the top 10 most popular free android games of all time.

A legendary puzzle game that is famous around the globe for its non-ending gameplay and makes it one of the top android games of all time. It’s such a game which keeps you crave more to play.

If you are an eathlete who loves to explore more and more, and also have a sweet tooth then this game is for you. All you need to do is to match candies of the same colors and you get to the next levels. The player has to show his/her quick thinking or smart moves for getting up and receiving awards. A daily booster wheel is there to receive rewards and challenges to win boosters.

The Game offers a sticky interface and gameplay, you play it and you are hooked to this game. The game got 500+ million download hits and was rated 4.5 stars. All these features together make the game popular and one of the best android games of 2019 and all time. So go and play it.

3. Need for Speed™ No Limits

When talking about the best android games of 2019, experience the underground car battles using the console-style racing on your android device by EA’s NFS. Drive the real-world cars and burnout the rubber on the streets and over the race tracks around the world.

Options to mod vehicles like M4, Porsche 911, McLarens, Bugatti Veyron, and many more dream cars. The console type handling and UI of the game let you steer on the streets, off-road, nitro zones, and traffic. Over 1000 challenging races to get the adrenaline rush into veins.

Moreover, 50+million downloads and the Australian studio FireMonkey have pushed the game to the limits of graphics, gameplay, and controls. If there is Need of Velocity then go for Need For Speed.

I’ll say, it is one of the most popular games of all time. Supercell designed such an addictive game that can easily possess its player. If you like wars, clans, team play then this game is made for you.

The game roams around the Base. The Base is the place that players build and they protect their resources from the opponents who attack them for these resources. The game provides four currencies Gold, elixir, gems and dark elixir. These can be used to build and reload defenses and can also be used to train and upgrade troops and spells.

Play Store gave 500M+ downloads to this game, which shows the popularity of this game among the users. As per the reviews, it is a great game that needs strategies, patience and leadership skills to play. These all together makes it one of the best android games.

Tencent’s Playerunknown’s Battleground is a battle royale action game which is awarded as the best of 2018 mobile games. It’s an absolutely remarkable game that keeps the players coming back to its gameplay and makes the game settled down in the top 10 most popular free android games.

The game offers various maps like Erangel, Miramar, Vikendi, Sanhok, Warehouse and many more. UI of the game is packed with striking and realistic visuals. You can go for three different modes like Classic, Arcade, and Evoground. 100 players are diving but you can become victor among them by killing and killing. All these features together make this game one of the most popular free android games available till now.

A stack of weapons and vehicles are available to make the game more realistic and challenging. A powerful anti-cheating mechanism makes the game transparent and fair. The game has got more than 100+ million downloads on Google Play Store and has a 4.5-star rating.

-5 Tips to Maximize Lead Generation for your Small Business
-7 Hobbies That Can Help You Earn Money
-9 hidden iOS 13 features you need to know about
-Important SEO Ranking Factors that Matter in 2019!
-How to take care for car wheels
-Steps which helps you achieve Financial Success
-How to Submit Guest Post
-Kheerganga Trek – Walk through the Nature!
-Mistakes to avoid while learning
-Most Common Mistakes That Everyone Makes In Cheap Essay Writing