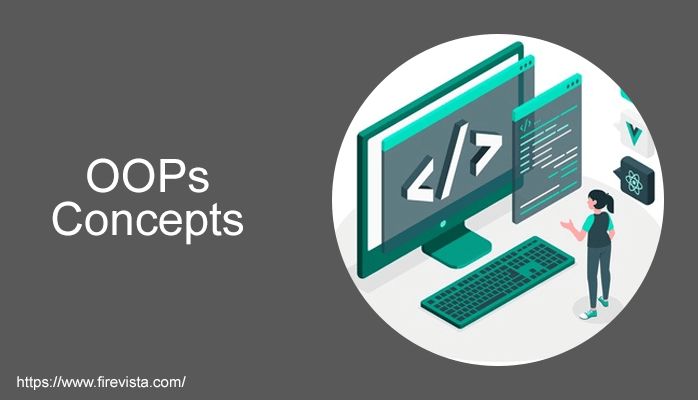 Mastering Object-Oriented Programming becomes necessary for any developer who wants to build high-quality software. The blog is discussing the main features and concepts of object-oriented programming in detail. Before moving further you should know what exactly is Oops. So, let’s not waste any more time and just dig in.

In Oops, the program will split into several small, manageable, reusable programs. And each program has its own identity, data, logic and the way it is going to communicate with the rest of the other programs.

Object-oriented programming (OOP) is nothing but writing programs with the help of classes and real-time objects. This approach is very close to the real-world and its applications. Because the state and behavior of these classes and objects are almost the same as real-world applications. So, let’s explore the general concepts of OOP.

What are the Class and Object?

It is the basic concept of Object Oriented programming languages which is an extension concept of the structures in C. It is an abstract and user-defined data type and consists of several variables and functions. The major role of the class is to store data and information. And the members of a class define the behavior of the class. A class is the blueprint of an object, but we can also say that the implementation of the class is the object. Also, the class is not visible to the world, but the object is.

Here, the class car has properties car_id, colour, engine_no and distance. It resembles the real-world car that has the same specifications, which can be declared public, protected and private. Also, there are some methods such as distance_travelled(), petrol_used(), music_player(), and display().

An Object is a detectable entity with certain characteristics and behavior. An Object is an instance of a Class. When we define a class, no memory is allocated but when it is instantiated (i.e. an object is created) there’s memory allocation.

Data Abstraction can be described as when users start focusing on the common properties and behaviors of some Objects while neglecting the irrelevant. In this, the unimportant will automatically get discarded. It is the heart of Object-Oriented Programming because this is what we do while making a class. Also, data abstraction simplifies database design.

Encapsulation refers to the idea of breaking down the program into small programs, classes, where each class contains a set of related attributes and behaviors. Instead of having a procedural, long program, we start to divide the programs into small reusable, manageable chunks.

Additionally, it also implies the idea of hiding the content of a class, unless it’s a compulsion to expose.

Inheritance is the ability of one class to inherit the capabilities or properties of another class, which is the parent class. When we write a class, we inherit properties from other classes. So, when we create a class, we need not to write all the properties and functions again and again. As these can be inherited from another class which it acquires. Inheritance also allows the users to reuse the code whenever possible and reduce its redundancy.

Polymorphism is the ability of data to process in more than one form. It allows the performance of the same task in various ways. It consists of method overloading and method overriding, i.e., writing the method once and performing a number of tasks using the same method name.

Some key points to know about OOP:

The blog is all about Object-Oriented Programming, it’s concepts and advantages. If you are just a beginner in programming then you should know the OOPs concepts. I hope it helps you out.