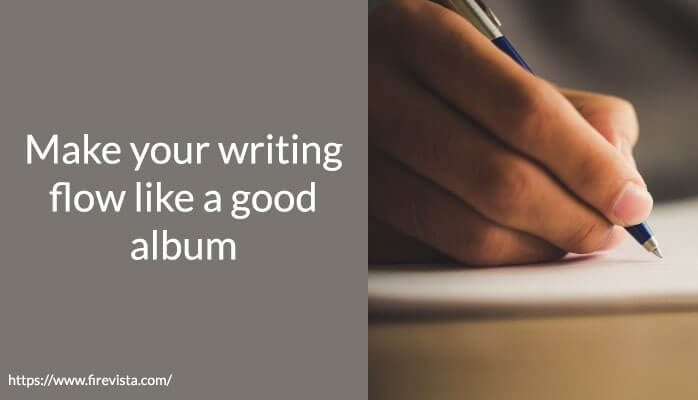 I have maybe two or three albums that I can honestly say I like in their entirety. Most of the albums that I own have a few good songs, but there’s always that one song (or two, or seven) that gets skipped any time I hear its opening chords. Even with albums by artists that I love, I can’t stand the filler songs—songs that were only recorded so that there would be enough tracks to justify the price tag.

You can apply the principles of a great album to the rules of wow essay writing. Think of your entire work as your album, and the individual scenes (or chapters, if you’re working on a novel) as your tracks.

If you were recording an album, you’d work hard on every song to make it evocative and memorable. Once the tracks were recorded individually, you’d look at the big picture: How do the songs sound when transitioning to one another? Do they all come together as a cohesive whole? Or do one or two stick out while the rest sort of fade off into the background? That’s how singers create great albums (like Jagged Little Pill, my favorite album). By following the same logic, you can create a strong work of art that, while composed of robust individual scenes, stands on its own as a singular piece.

The song remains the same

You wouldn’t want to buy an album where every song sounded the same. If every track had the same pacing, identical melodies and harmonies, and similar lyrics, they would be indistinguishable. In writing, you also don’t want the scenes in your story to be clones of one another. Some tips you can try to make scenes more individual are:

A mediocre album has two or three great songs, and then a few that were rushed to be recorded to give it enough tracks. You don’t want to do the same thing with your writing. If you put in an extraordinary amount of work into a few of the scenes, but then dash out the rest to fill it out to meet some arbitrary length requirement, you’ll have mediocre writing. It is better to have a shorter piece that is strongly written in its entirety, than a longer work that has filler. Here are some tips to ensure that you aren’t writing too much:

By strengthening every single scene in your writing, you can eliminate any trace of filler. You won’t have to fear that your reader will hit the “skip” button on a part of your work. Go listen to your favorite album—what about it makes you able to stand every single track? And no, it’s not slacking off—if anyone asks, it’s research.